The Acoustic Performance Of Single Deck Timber Floors In Refurbishment

The last ten to twelve years has seen the emergence and increasing usage of single deck, direct to joist acoustically insulating floor boards.

These boards normally consist of 22mm flooring grade chipboard bonded to a resilient layer which provides the acoustically separating bearing onto the joists. This type of product is relatively easy to install and, by performing the normal structural functions as well as tentatively achieving the Approved Document E acoustic requirements for the change of use “refurbishment” at least, they present an attractive proposition. 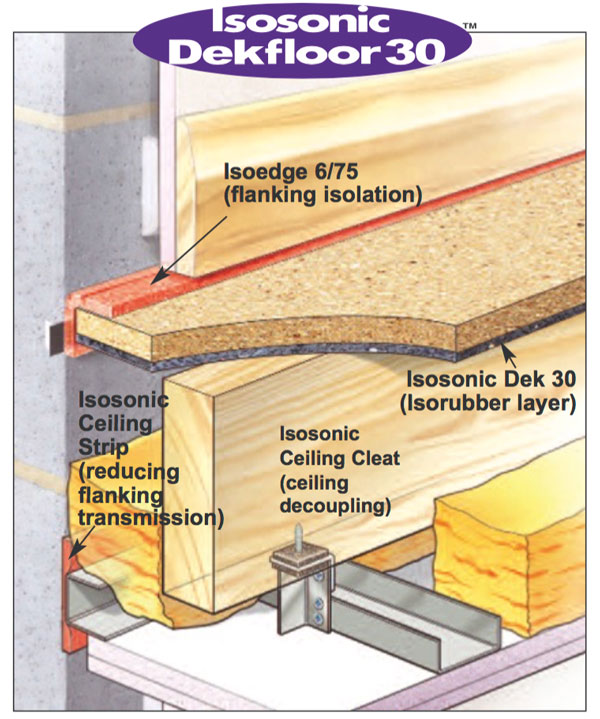 Thermal Economics has recently developed and launched the Isosonic Dek 30 board for this application and in the process carried out a series of laboratory and field acoustic tests, which provide a very strong indication that given the fairly normal conditions of;

the floor deck itself requires a mass of at least 21 – 22Kg/m2 in order to consistently meet the ADE minimum 43dB (DnTw+ctr) airborne sound transmission requirement. 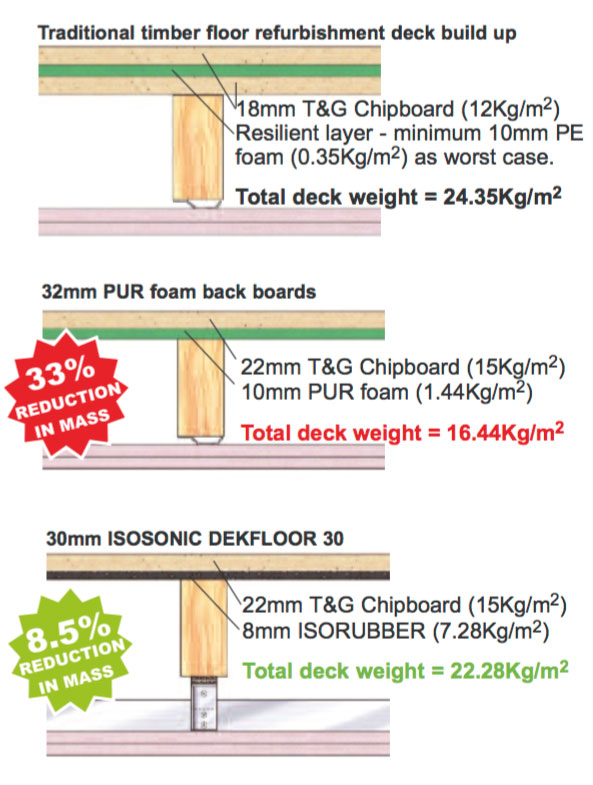 Timber floors are generically problematic in resisting airborne sound transmission due to their lack of mass. It is worth reflecting that prior to the event of the “single deck” systems the common construction which was deemed to meet the then (lower) acoustic requirements consisted of;

Which together weighed 20 – 25Kgm2 and was substantially heavier than 22mm chipboard with a PE or PUR expanded foam backing weighing 16 – 17Kg/m2.

In the case of Isosonic Dek 30 the resilient layer consists of 8mm Isorubber with a density of 910Kg/m3, giving a total board weight of 22.3Kg/m2.

The tested versus actual under load and the long term (aged) impact sound absorption performance of light weight PE and PUR foams could also bear some scrutiny. 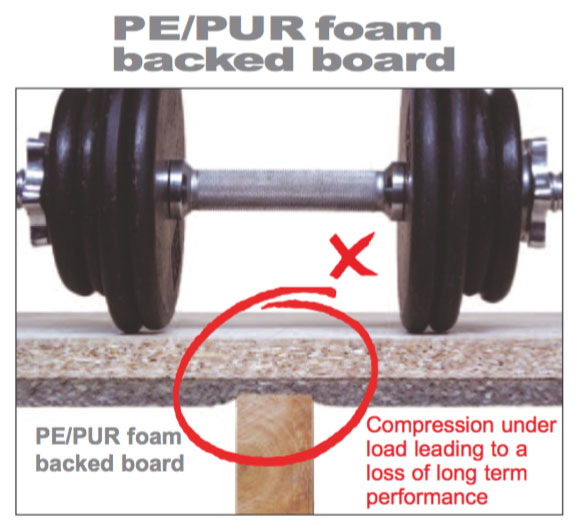 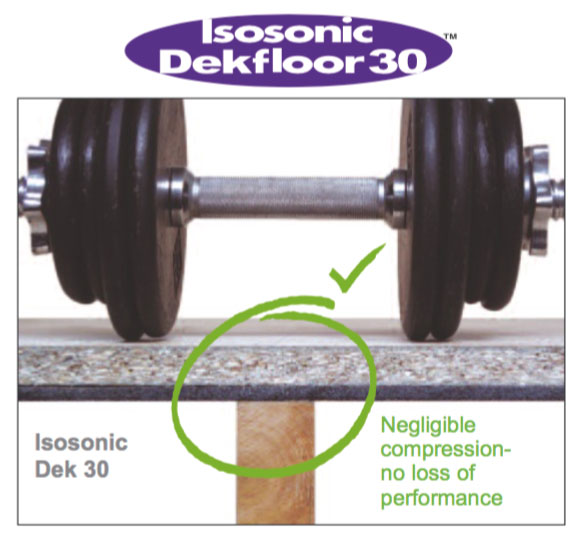 Solid PE and PUR have densities of between 1000 – 1200Kg/m3, which means that the typically employed expanded foam of 35Kg/m3 density must be around 97% air/gas by volume; which, over a period of time and under load

will defuse / deflate. This compaction leads to a loss of resilience; the ability to absorb impact sound energy.

Isorubber on the other hand is a very dense material with excellent energy absorption properties but undergoes no effective short term compression. This means that ” what you test is what you get” for the designed life span of the building.

Considering then that a domestic floor can be subjected to imposed loads in excess of 200Kg/m2 including partitions, and also that acoustic tests are inevitably carried out in the unloaded state, the question should be asked if the tests are truly representative of the real in use performance.

In conclusion; it is always worth scrutinising test data to ensure that it truly represents performance in actual usage and that it will last for the expected duration of the usage.

It is worth noting that in the case of thermal insulation, aged thermal resistance values have long been a standard requirement, but strangely acoustic standards have not yet progressed to this stage.

IDS showcase at KBB Live for the ...