as universities adjust their business models in response to changes in funding structures, university campuses have seen a significant investment to address the increasingly competitive nature of the higher education sector. Continuing pressures on finances in the sector mean that development projects must focus on durability that will deliver value and sustainability on a ‘whole life’ basis. However, a university campus must also sell itself as an attractive place to live and work so there is also a clear aesthetic imperative to enhance the built environment with schemes that are attractive as well as being energy efficient and practical.

At Huddersfield University, recent improvements to facilities include four new buildings, including a new sports hall, Dean’s office and corporate suite, designed by architects Watson Batty. The four buildings have been constructed with a single steel frame and all adjoin each other but rise
to different heights varying from 2-4 storeys. To enhance the biodiversity and aesthetics of the development, green roofs were specified for three sections of the building, including the sports hall, and a warm roof was specified for the corporate suite. The variation in height of the interconnecting roofs means that some roof areas overlook the roofs of others, and the fact that the lower roofs are mostly shaded presented challenges in terms of both planting and drainage. Addressing those challenges became a team effort between the architects, the roofing contractor, Cawston Roofing, the green roof supplier ABG and the waterproofing specialist, Kemper System.

While the intention for the buildings had always been to install a combination of green roofs on three of the four roof areas and a traditional warm roof build-up on the fourth, the architect had originally specified a single ply membrane as the waterproofing system for the project. However, having used the Kemperol V210 cold liquid-applied waterproofing membrane from Kemper System for around 30 years, Cawston Roofing suggested to the architect that this would offer a more practical and durable alternative for a similar installed cost as the original specification. Meanwhile, ABG had developed an innovative ‘blue roof’ drainage system, which puts a high density polyethylene (HDP) reservoir under the growing medium to replace the more conventional SUDS system, reducing the installation time and avoiding costly and time-consuming excavation of separate drainage tanks.

Explains Nick O’Mara from Cawston Roofing: “The Huddersfield University project demonstrates how important it is to consider specification decisions in a holistic sense rather than thinking about material costs in isolation. For the green roof system, avoiding the need for a SUDS system
saved time, money and costs on site. For the waterproofing membrane, a change to Kemperol V210 meant that we could be more flexible with the programme and more creative with the roof build up as well as providing an FLL certified root-resistant and robust waterproofing membrane
with a guaranteed service life.” Innovative Approach

The proposal from Cawston Roofing and ABG was to invert the roof by applying the Kemperol V210 waterproofing membrane first, followed by the insulation, the blue roof drainage reservoir and then the growing medium.

“Applying the waterproofing membrane first provided a key advantage on site”, explains Nick. “It meant that the roof of the building was completely water-tight earlier in the installation process, saving valuable construction time; allowing fit out works on the lower levels of the building to take place sooner.”

For the three green roofs, Cawston Roofing applied Kemper System’s Kempertec EP primer direct to the concrete slab substrate and, once this had cured, the Kemperol V210 cold liquid resin was applied. The Kemperol V210 resin saturates a non-woven reinforcement fleece and cures to
provide a seamless, monolithic membrane that is tough and permanently flexible. Finally, Cawston Roofing installed 180mm insulation board onto the cured waterproofing system, followed by a slim line breather membrane, before passing the installation to ABG to complete the green roof
element of the project.

ABG installed a 40mm deep ‘Blue Roof’ drainage reservoir onto each of the three green roofs which provides collection and storage or rainwater to irrigate planting during dry periods, and offers a continuous drainage layer across the roof structure with attenuation capabilities which helps
control the discharge of storm water. The growing medium and planting was then individually selected for each roof to take account of the roof area, location and level of shade created by surrounding buildings, with biodiversity measures built in to the specification. Explains Martin Lambley from ABG: “The sports hall roof has been designed as a wild flower meadow with planting of native species and areas of biodiversity, including log and rock insect nesting boxes and sandy and shingle areas. The other two roofs are at a lower level and are shaded by areas of the new building and adjacent existing buildings so here we used drought tolerant sedums and alpine planting.”

The corporate suite section of the building has a metal deck roof and here the roof build up featured a vapour control layer installed directly onto the substrate followed by Kempertherm warm roof insulation. Cawston Roofing prepared the insulated substrate with Kemper System’s Kempertec D primer and, once this had cured, applied Kemper System’s Kemperol V210 waterproofing membrane with the same wet-on-wet process used for the green roofs.

Nick adds: “Throughout the roofing process, switching to a cold liquid-applied waterproofing membrane enabled a much more flexible programme which speeded up the installation. Because the Kemperol waterproofing system bonds seamlessly to any substrate, including verticals, waterproofing of details on the roofs, such as pipe penetrations and drainage outlets was also made quicker and easier, as was the application of the waterproofing system on the upstands. This project really demonstrates how beneficial it can be to consider buildability benefits as well as functionality when specifying a roofing system.” 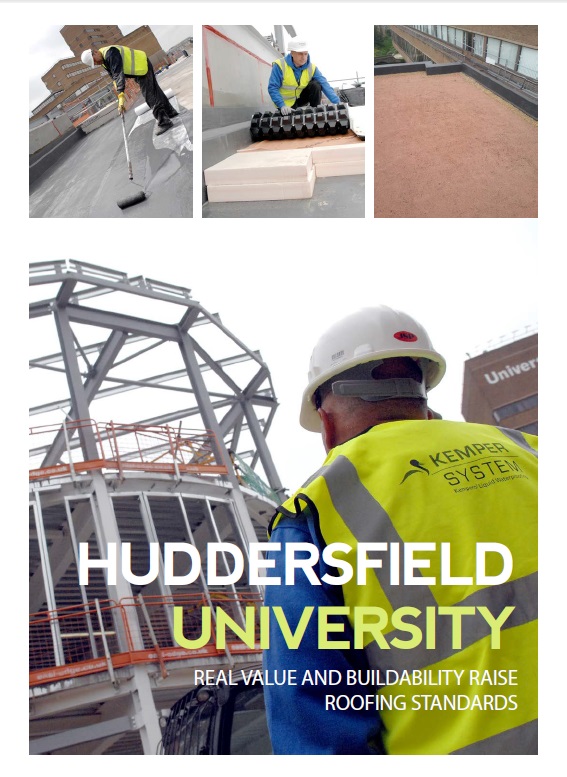 COLLABORATION IS KEY FOR HEALTHCARE LEADERS

Simply Cladding – A Stunning Alternative to ...