SHH has completed the re-creation of a family home in Hampstead. The brief was to replace a former energy and functionally inefficient house, which was deemed architecturally insignificant to Hampstead’s Conservation Area, with a well-appointed and beautifully detailed contemporary home on a re-arranged, slightly larger footprint. The discreet approach that SHH took through the proposed design maintains and contributes to the landscape by bringing particular attention to building materials, landscaping, screening and privacy.

A number of changes were introduced to the construction of the house, including a shift from a ‘square’ footprint to a form which allows the South facing garden to become more relevant by bringing more fluidly to the western garden. Subsequently the bulk of the house has been redistributed from the southern corner to the western facade, allowing an influx of natural light. The house has been designed with split levels, linking several spaces to the outside and ensuring that the setting on a sloping site becomes an asset rather than a setback, with exit to the outside spaces from three levels.

The newly formed house follows the natural slope of the site’s landscape which drops approximately three metres from the entrance to the rear garden. SHH provided a full architectural and interior design service on the project from concept, planning and layout to detailed design. Pawel Nawojczyk, Associate Director at SHH, said of the design approach, “our goal was to create a more comfortable and modern home in harmony with the surrounding landscape by responding more appropriately to the shape, slope and orientation of the existing site. Our main challenge was how to comfortably nestle the property by cleverly optimising the gradient of the plot whilst not losing the functionality of a welcoming yet distinctive family home”.

The building’s two-volume structure consists of a steel and timber framed upper part and a sunken, concrete lower half. The layout follows a two ‘winged’ horizontal split, with each wing running in parallel to the site. The central core is where the vertical circulation occurs with floor voids creating a triple-height volume with a stunning full height glazed curtain wall and slot rooflights. Each floor is arranged in a split level to concur the natural grade of the site. The ground floor is divided into informal and formal spaces, with the kitchen, family living and family dining areas all situated on the western wing. Adjacent to the entrance are cloakroom facilities as well as a guest bedroom.

The eastern wing comprises of the master suite as well as formal living and dining rooms with all major windows orientated away from the neighbouring gardens for more privacy. Skylights have been introduced into several rooms where windows were removed in order to mitigate overlooking issues.

The lower ground floor provides extensive leisure facilities including a contemporary swimming pool which leads out to the lower garden level, through a guillotine window, allowing for both indoor and outdoor swimming for year-round enjoyment. A modern gym has also been appointed next to the pool. A multifunction playroom and cinema area have been allocated on the lower ground floor benefitting from a light well for necessary light and ventilation.

The use of natural shade renders, low maintenance and enhanced longevity mock timber cladding and extensive fenestration kept the overall aesthetic simple and versatile.  A fairly minimalist and crisp material palette was adopted to contrast the natural setting including warm hardwood flooring, white walls for the core, ground and lower ground floors as well as timber finish slats. Green roofs were also introduced on each wing to enhance natural habitat creation as well as helping the building blend in the large garden, particularly from neighbouring higher vantage points.

One of the aspirations and conditions for granting the planning consent for this project was the enhanced energy efficiency of the building itself. David Spence, founding partner at SHH, comments: “We were appointed by the owner to deliver a contemporary interpretation of a single-family residence. Our aim was to replace the energy inefficient and architecturally insignificant existing structure with a well-appointed and energy-saving home, finished to the highest standard, both inside and out. The property makes a timeless architectural statement whilst remaining sympathetic to the natural surroundings.”

A number of passive measures were introduced, such as highly efficient insulation materials to floors, walls and roof (including the ultra-efficient Optim-R panels to terraces), minimised air permeability and the use of high spec modern efficient fenestrations, the performance was further enhanced with high efficiency installations such as LED lighting throughout including lighting control system, high efficiency appliances and fireplace, as well as the inclusion of energy and building management system. In relation to sustainable elements, Sustainable Drainage Systems (SuDS) water management system has been installed enabling the use of rain water for irrigation; along with the green roofs that also promote habitat creation, this system ensures the water runoff is minimised and regulated. The ambient in the house is supported by the inclusion of cutting edge CHP (combined heat and power) boilers, whilst cooling and heating boost is provided via acoustically insulated air source heat pumps. 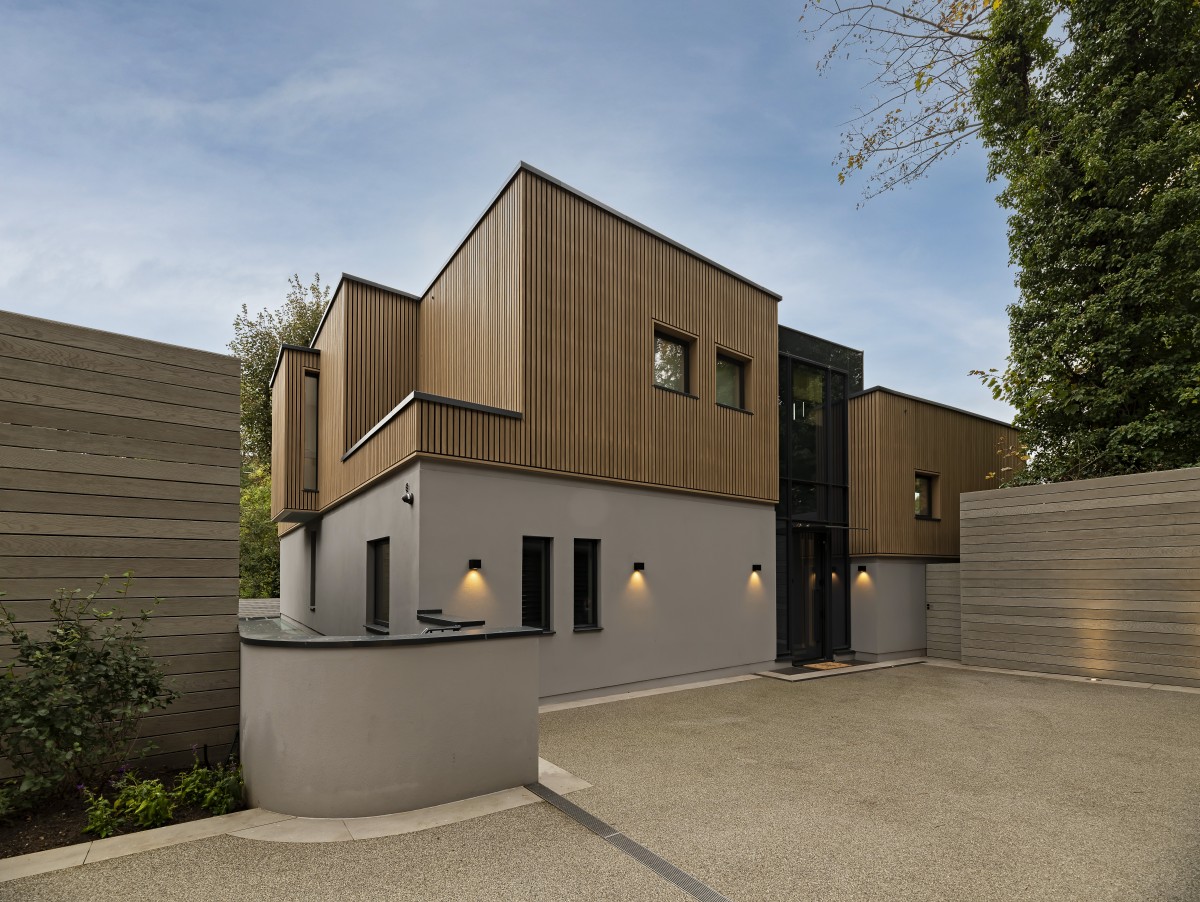 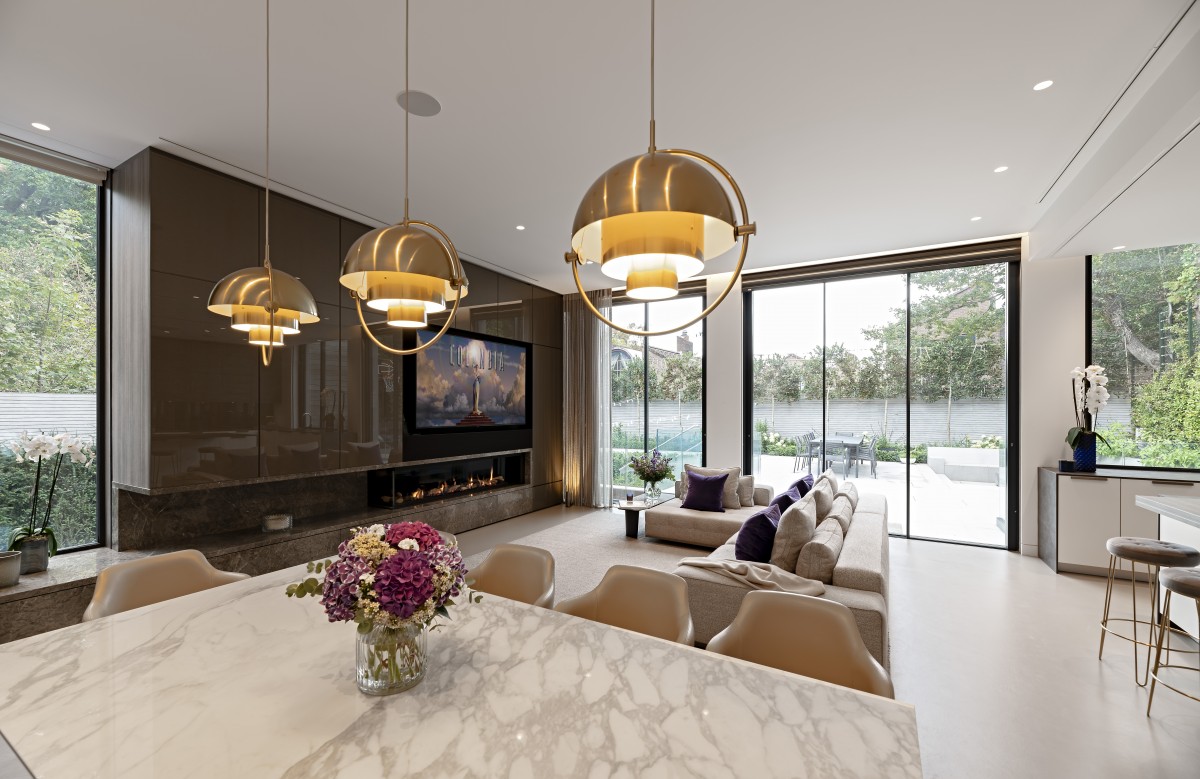 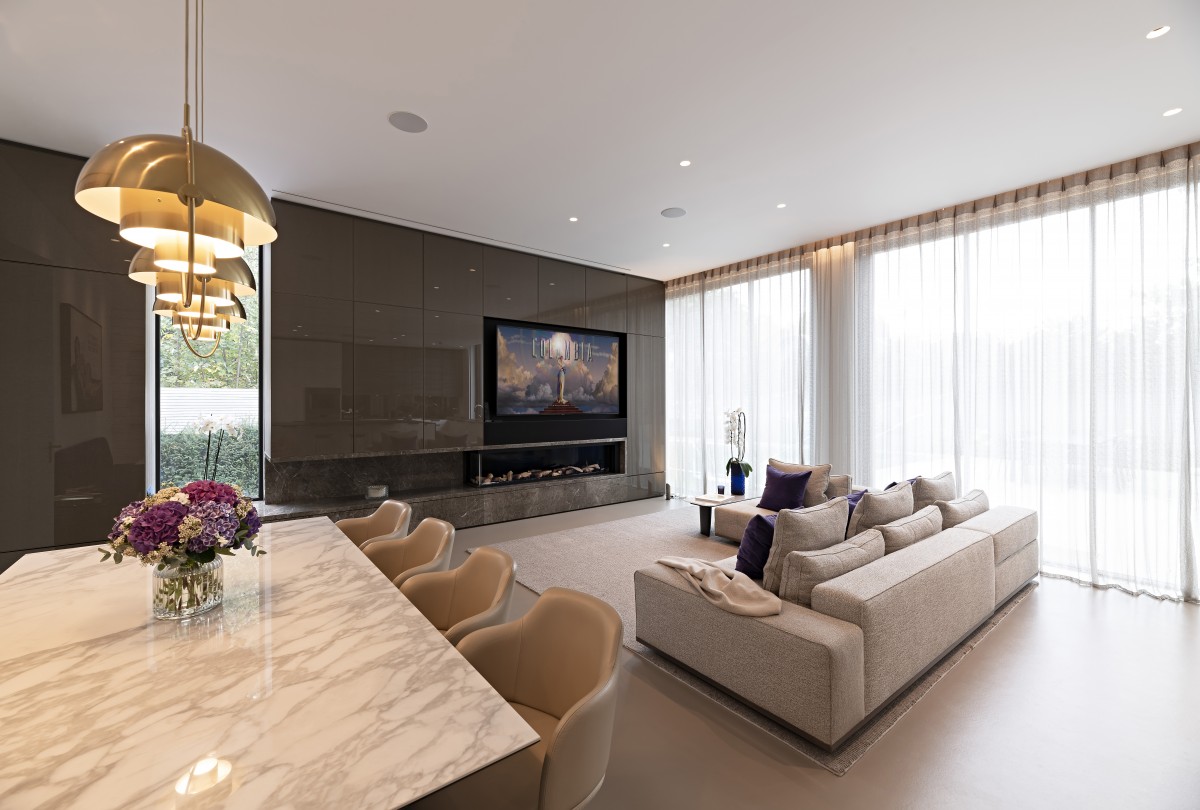 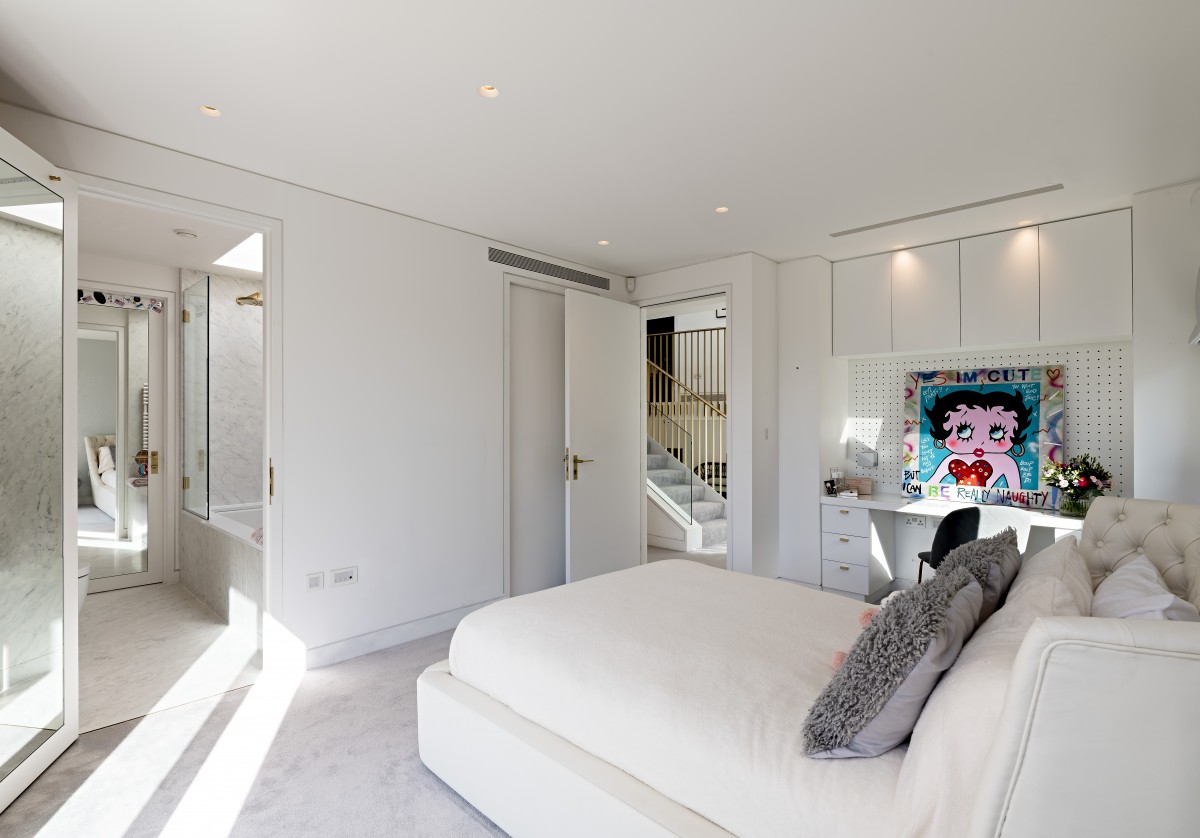 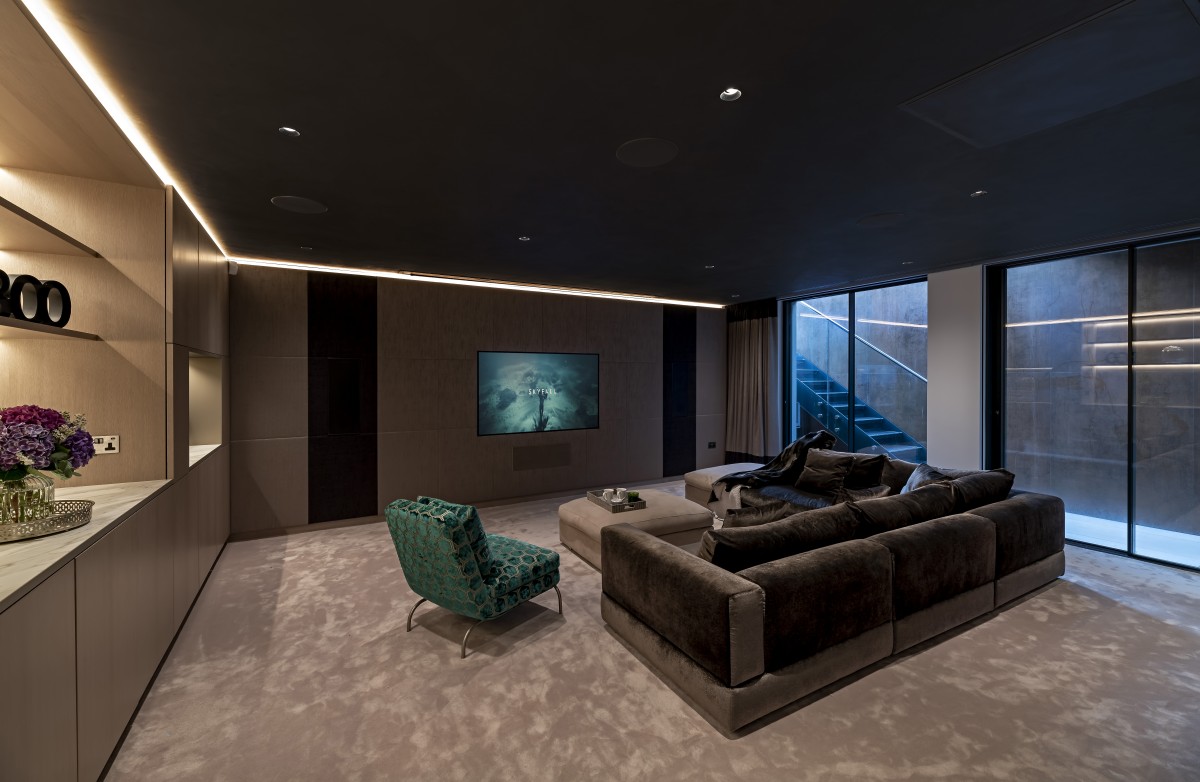 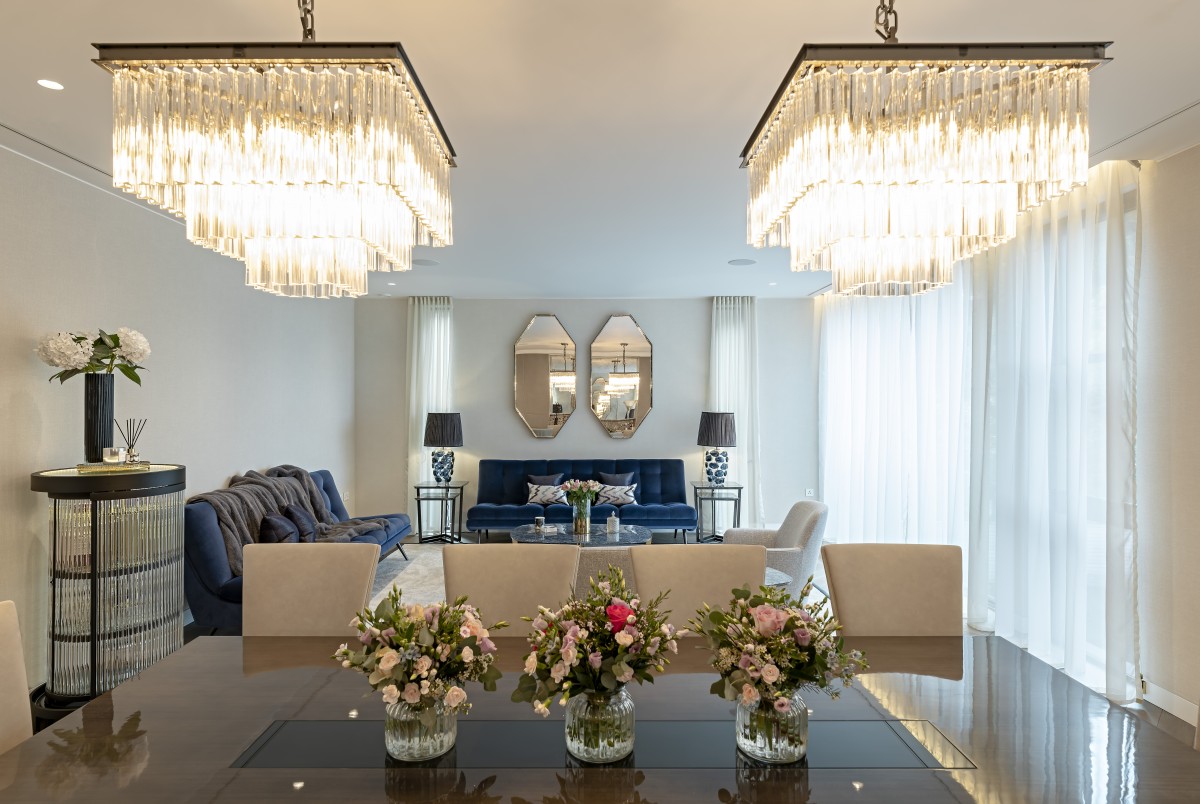 Charming views on the west coast of ... 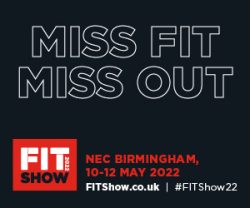