Having launched new cordless grinders, and a hammer drill earlier in the year, FEIN is extending its 18 V product range with the ASCM 18 QSW 4-speed cordless drill/driver. This is an alternate version of the 12 and 18 volt ASCM machine, already popular within the community but with two new benefits. Firstly the Multi-Volt feature allows the machine to be powered by a 12 to 18 V lithium-ion battery, and secondly the body is lighter and more compact, weighing just 1.7kg.

Tradesman value professional tools – and Dieter Zimmermann is one such person. His surname (which means “carpenter” in English) is spot-on, because he undertakes a lot of renovation work and takes pleasure from doing so, even using the tools at home. “I’ve renovated my apartment’s two floors, and will do the bathroom next year.” In addition, the 39-year-old has helped many of his friends, some, like him, have also purchased apartments in old buildings or houses from the 1960s and 1970s. “Some of them had to be completely renovated.” To tackle such work, Dieter Zimmermann relies on FEIN.

His latest acquisition is the ABH 18 rotary hammer, with which he recently punched slots in concrete for routing electric cables, and drilled holes for electrical outlet sockets in a kitchen. “There was nothing it couldn’t do; without it we wouldn’t have finished the job. It really felt like the batteries maintained their charge right to the end. And, the battery’s charge lasted an extremely long time, which frankly surprised me – in a positive way.” In addition to its powerful performance, he finds the FEIN battery system highly practical. “Once the rotary hammer’s battery was flat, I just plugged in the one from my MultiMaster. Then I got back to work.”

Professionals in particular need high-quality power tools that they can depend on to do the job, are easy to use and can be used for a variety of tasks. The issue of time is also an important factor for professionals because they often only have a small time window to install the kitchen in the customer’s premises or to complete interior work in general. To make this possible it is key that all the drills are supported by what is referred to as the FEIN QuickIN interface, meaning the end-user can change over accessories tool free, with a large compliment that helps turn a drill into one universal tool for numerous applications.

We now have the SKE drill chuck, an automatically re-tensioning drill chuck from Röhm that prevents drill bits and taps from slipping. Even in reverse running, the drill chuck is stable and remains reliably closed. Other new additions include tapping collets, which can be changed just as easily without the need for tools. The collets transmit the torque to the square surface of the tap, which prevents slippage. The big news though is that following numerous requests by community members FEIN has now launched an angle head, which enables users to work around corners, even in tight spaces. This product development is one of many that will occur in response to ideas and tooling requests by British tradesman within the FEIN UK community.

For more information on Fein’s cordless revolution please go to https://fein.com/en_uk/ or contact FEIN directly on 01327 308730. 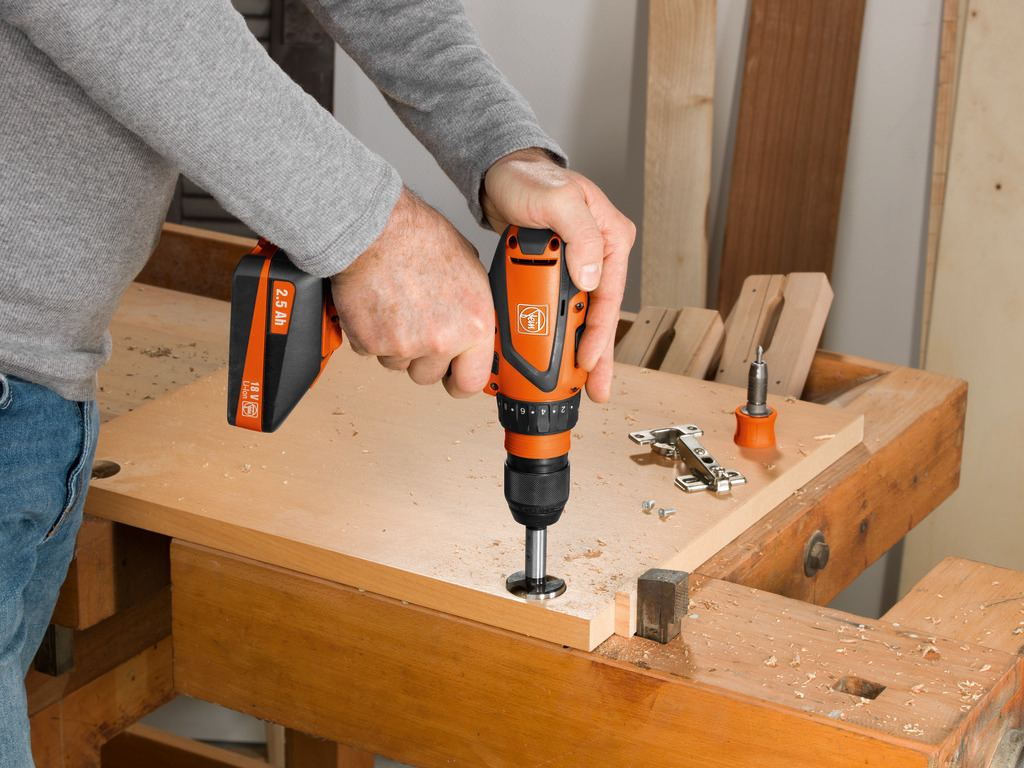 The show that’s got decorating covered

Be in control of your working enviroment. ...